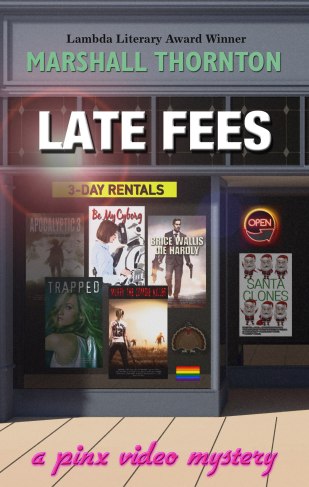 This year I’m lucky enough to have two books up for Best Gay Mystery at the Lambda Awards!

It’s Thanksgiving, 1992 and Noah Valentine is late picking his mother up from the airport. When he arrives he discovers that she’s made a friend on the flight whose also waiting for her son. When the woman’s son doesn’t show up, they eventually take her home for breakfast with neighbor’s Marc and Louis. Soon after, they learn that her son has overdosed—or has he? Noah and his motley crew investigate over the holiday weekend; which includes a fabulous dinner, a chat with a male stripper, a tiny little burglary and some help from Detective Tall, Dark, and Delicious.

It’s February 1985. Nick struggles to recover from a gunshot wound while taking on the case of a woman with a mental illness, who may or may not have witnessed a murder. As he attempts to determine exactly what the woman saw and how much danger she may be in, he juggles the approaching DeCarlo trial, an ill Mrs. Harker, and the sexually precocious Terry. Valentine’s Day with boyfriend Joseph produces some big changes in their relationship. Life is evolving, but there’s no guarantee it’s for the better.

2 responses to “Both Late Fees and Boystown 11: Heart’s Desire are finalists for this year’s Lambda Award in Gay Mystery​!”

Error: Twitter did not respond. Please wait a few minutes and refresh this page.