When failed actor Cal Parsons travels to rural New York to claim the estate of his famous and estranged ex-partner he discovers something he wasn’t expecting…the ghost of his ex! And, worse, his ex invites Cal to join him for all eternity. Now. As Cal attempts to rid himself of the ghost by any means he begins to fall for the attractive attorney representing the estate. Will Cal be able to begin a new relationship or will he be seduced into the ever after? 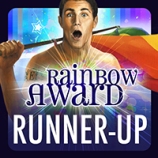 “A highly entertaining tale of the ex who wouldn’t leave, with a hilarious cast of characters you won’t soon forget.” Eden Winters, author of Diversion.

Error: Twitter did not respond. Please wait a few minutes and refresh this page.