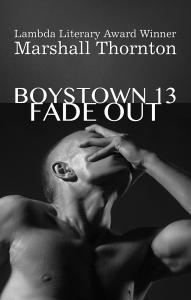 The Lambda Award-winning Boystown Mystery series comes to a close with Boystown 13: Fade Out. When a box containing a woman’s corpse shows up at his doorstep, Private Investigator Nick Nowak finds himself accused of murder. The police are convinced it’s Rita Lindquist—a woman who once shot Nick. Their case is thin, but they and the state’s attorney are determined to prosecute him. Recent events have left Nick emotionally gutted and he’s not even sure he wants to fight back. But when he’s mysteriously bailed out of jail, he can’t help by try to solve the mysteries in front of him. Who posted his bond? Why is the state’s attorney trying to railroad him? And what’s the real identity of the girl in the box?