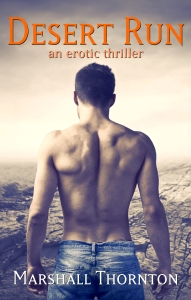 Palm Springs, 1973. Don Harris is a piano player on the run after killing a Chicago mobster’s son in a bar fight. On the lam, he meets a pretty blonde girl in town for a convention. He lets down his guard and spends the night with her only to discover she’s the younger sister of his best friend all grown-up. Foolishly, she tips her brother off to Don’s location, and he’s on the run again, hoping to find a safe place to land.

Out of money and desperate, Don accidentally walks into a gay bar where he allows a kid named Harlan to pick him up so he’ll have a place to stay. As the mob chases them, Don begins to fall for the kid, putting them both in harm’s way. Harlan has problems of his own, and Don knows he shouldn’t get involved but he can’t help but step in when Harlan gets in trouble. To save himself, Don’s got to save Harlan.

“Oh, man. Colour me impressed with a capital IM. You hear that? Not just a capital I. No, Desert Run deserves two capital letters to tell the world just how damn impressed I was. You know when you open a book and the voice just slaps you upside the head and you sit back and think, “Oh yeah, this book is going to suit me!”? Well, this happened to me. The voice is friggin’ great…” Miz Management, Miz Loves Books.

“Desert Run is the first book I’ve read by Marshall Thornton and it won’t be my last! I’m always on the hunt for books written by authors that are new to me, so I was pretty excited to be able to read and review this book. I’m pleased to say that I was quickly enthralled by the fast-paced storyline and the different and intriguing twists and turns the plot takes throughout the storyline. But, the main reason I loved this book is because I adored both heroes, Don and Harlan, and how their relationship developed as the book progressed.” Daisiemae, Night Owl Reviews.

Ebook available at Amazon and Kindle Unlimited. Paperback available wherever books are sold.